>Since November 2008, when The Humane Society of the United States(HSUS) revealed that they had done an eight-month long investigation into Petland and it’s puppies for sale, SARO has joined with HSUS to get the only New York location to stop selling puppies that come from puppy mills. 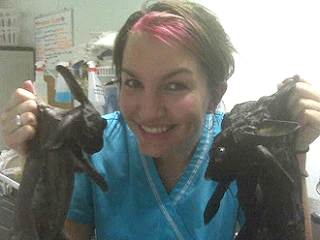 A few weeks ago, PETA discovered a disturbing photograph (pictured right) and comments posted on Facebook by then Petland employee Elizabeth Carlisle, who worked at the store in Akron, Ohio. The photo shows a grinning Carlisle posing for the camera as she scruffs the bodies of two dead, soaking wet rabbits. Carlisle admitted to a Facebook friend that she drowned the rabbits, claiming that her manager took the photograph while Carlisle was "swearing at [the rabbits] to just hurry up and die … " Currently Carlisle faces a year in jail for animal cruelty.

It appears Petland can’t provide the basic supervision and care necessary to keep the animals it sells healthy and safe.

Ask Petland to stop selling rabbits now! (This is a PETA Action Alert)