>SARO received this flier the other day and though it was a good concept, so we thought we’d pass it along to you.

What is an Anti-Fur Zombie Flash Mob you ask?  Well, a flash mob is a large group of people who assemble suddenly in a public space, perform an unusual action for a brief time, then quickly disperse.

For this particular event, people will be dressed as zombies, declaring “I’d rather be dead than wearfur.”
– Meet at the Regional Market Building located at 2100 Park Street at 12 noon sharp, no dawdling.
– Look for the sign “Zombies Meet Here”
– Come dressed in zombie garb: ripped, dirty and disheveled clothing.  Wear your own zombie makeup or bring $3 to use provided makeup.
– All zombies will receive a briefing before the event begins.
– People not planning on being a zombie need not attend. 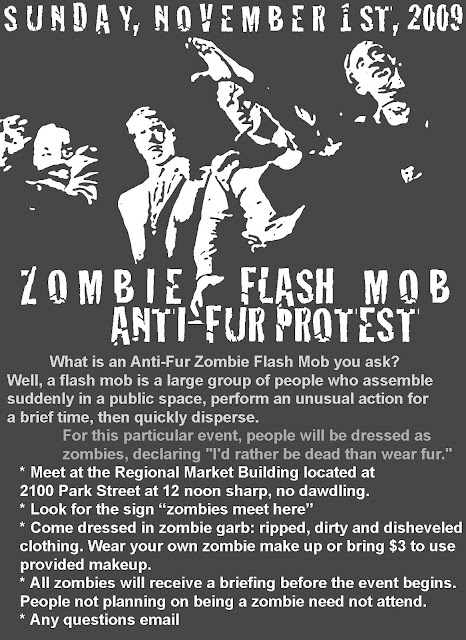 Need some inspiration on being a zombie?  Hulu is playing Dawn of the Dead until March 1, 2010 for free.