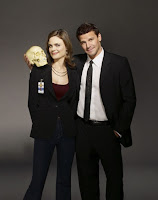 As animal advocates we know that thousands upon thousands of “murders” happen each day in slaughter houses across the country. Did you know that footage of video filmed in these slaughter houses has mad it’s way to prime time television? In this week’s episode of “BONES”, staring David Boreanaz and Emily Deschanel, both of whom have done PETA ads, if you watch closely you will see footage supplied to the producers of the show by Farm Sanctuary and PETA.

While the show originally aired this past Thursday, November 5th, you can catch the complete episode on Hulu until December 18th.